Home › Reportajes › One Mexican against the Universe

One Mexican against the Universe 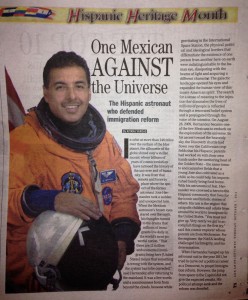 In orbit at more than 248 miles over the surface of the blue planet, the silhouette of the globe shined over a stellar mosaic where billions of years of cosmic evolution have tattooed the history of the universe and of humanity. It was from that remote and faraway place where the speech of the former astronaut Jose Hernandez took a sudden and unexpected turn. When the Mexican astronaut’s brown eyes stared over the earth, his thoughts turned to the drama that millions of immigrants live daily in the world’s most powerful nation.

“That there are 12 million undocumented immigrants living here [United States] means that something is wrong with the system, and the system has to be corrected,” said Hernandez after returning to the mainland.

It was a few words and a consciousness born from beyond the clouds, because while gravitating in the International Space Station, the physical, political and ideological borders that differentiate the existence of one person from another here on earth were indistinguishable to the human eye, dissipating with the beams of light and acquiring a different character. The galactic landscape opened his eyes and expanded the human view of this innate American spirit. The search for a sense of meaning to the injustice that dominates the lives of millions of people is reflected through a renovated belief system and is propagated through the voice of the scientist.

On August 28, 2009, Hernandez became one of the few Mexicans to embark on the exploration of the universe. In his ascent toward the heavenly sky, the Discovery shuttle had flown over the Californian crop fields that his Hispanic parents had worked on with their own hands under the sweltering heat of the Golden State – the same tomato and cucumber fields that a young Jose also cultivated as a child, so he could help his impoverished family bring food home.

With his astronomical feat, Hernandez was crowned a hero to the Hispanic community that lives for the iconic and historic stories of others. His tale is the engine that catapults children and adults from around the world to immigrate to the United States. “You must not give up. Very rarely we get to accomplish things on the first try,” said this cosmic explorer whose parents are from Michoacan. For the engineer, the NASA landing challenged his integrity, and his determination.

When Hernandez hanged up his astronaut suit in the year 2011, he tried to carve out a political career as a Democrat, to propel immigration reform. However, the jump from space to the Capitol did not give the expected results. His political attempt sank and the reform was derailed.