AN IMPORTANT NOTE: On June 22, 2021, Hadari Oshri –Marc Lubaszka’s business partner– filed a civil harassment restraining order (CHRO) against me to stop the publication of my investigative series “A Special Report: The Harrowing Impunity of White-Collar Crime,” and any subsequent installments or future media coverage. On August 3, 2021, I filed an anti-SLAPP motion to strike Oshri’s CHRO petition. In a hearing held on September 13, 2021, Los Angeles Superior Court Judge Doreen Boxer granted my anti-SLAPP motion and denied Oshri’s civil harassment petition for failure to sustain the applicable burden of proof. Oshri will now have to pay my attorney’s fees for filing a frivolous case. She also declined to go on a recorded interview or provide statements via email. And what follows are the next installments of my months-long investigative series whose publication Oshri desperately attempted yet failed to stop.

Los Angeles (CA) – As the COVID-19 pandemic was claiming victims in cities across the US, New York was rushing to bury the dead in improvised mass graves, and hospitals nationwide competed against each other for limited personal protective equipment (PPE), the Australian government was expecting the delivery of 50 million N95 masks from Texas-based energy executive Arael Doolittle.  The shipment of supplies never arrived, and the US Secret Service halted the sham operation led by the former VP of Nationwide Resource Group before the $317M payment could go through.

Amid millions of deaths worldwide, unprecedented grief and desperation, there were legitimate PPE players, but hidden among them were also profiteers with much less noble intentions. PPE shortages had unleashed the purchase and sales of nonexistent and counterfeit medical gloves, face masks, gowns and COVID-19 test kits. And Doolittle’s multimillion-PPE scam exemplified a whole new breed of greedy and inexperienced entrepreneurs that emerged during the worst pandemic to hit the planet since the 1918 Spanish flu in order to falsely assist those in dire need by promising supplies they didn’t posses.

In July 2021, Arael ‘Big Daddy’ Doolittle pleaded guilty to PPE wire fraud and is awaiting sentencing in prison. But some PPE gangapreneurs with business ties to the convicted Texan executive have managed to avoid any potential civil and criminal charges –at least for now. Among them are American small businessman Marc Lubaszka and Israeli entrepreneur Hadari Oshri.

With his alleged $300M in assets, real estate properties in both the US and Venezuela and his high-end lifestyle, Lubaszka was ready to step up his game, quickly ship, fly and deliver much needed PPE to doctors, nurses, and dying patients across the world through his private jet company: Fly Private X.

Marc Lubaszka bragged about his alleged real estate empire in a story he wrote under a pseudonym: deceased German-American philosopher Herbert Marcuse.

And Lubaszka’s carefully-curated Instagram account (@red.hangar) delivered proof of such intentions –or so he thought. A sneak peek of his glamorous social media world showed photos of him in an undisclosed hangar, posing next to a stunning model in a COVID-19 fundraiser party, driving a vintage car, standing in front of a large boat against the starry night and sitting in a private jet ready for take off.

But Lubaszka’s staged photo inside an alleged $50M private jet –a setting for which he didn’t even pay– was taken in a popular go-to rental studio in LA for influencers who earn a living by faking lavish lifestyles. And it soon became clear that his alleged assets of $47M private jets, yachts and commercial airplanes –including several A380s– quickly vanished into thin air like he did in the aftermath of his Aurum Advisors fiasco. That’s, of course, if the jets had ever existed, been flown, landed and shipped much-needed PPE anywhere in the world. 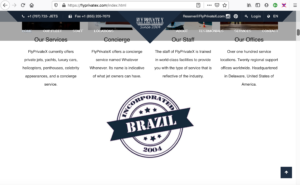 Fly Private X was formed in Delaware in 2019, yet it claims it was incorporated in Brazil in 2004.

“He offered to hire me independently late last year to sell his private jets, but it went nowhere because whenever I asked to see his fleet, he could not deliver. So that was a red flag. That in addition to him being drunk all the time,” says Kamille Gordy, a realtor based in Los Angeles who got blocked by Lubaszka on social media after confronting him about his last name.

“I don’t know why he isn’t arrested or facing trial yet. I see him all the time walking around Palisades Village,” she says. “He said he got a new home in Malibu, so that could explain maybe why he is in the Palisades.”

Lubaszka registered Fly Private X in 2019 under the strong privacy laws of Delaware, a state that allows for ownership details to be obscured. Throughout most of 2020 and 2021, the company site falsely stated that it was incorporated in Brazil in 2004.

But this past summer, following the release of Part I of this exposé, the Fly Private X site went “under construction,” raising further questions about its legitimacy and the real nature of its operations.

According to multiple sources, Lubaszka’s claims and portrayal of his private jet company are not accurate representations of reality. No one I’ve interviewed to this date has managed to book any of the services that were offered online until the site went dark. Calls have gone unreturned, and prior victims who have reached out to Fly Private X trying to collect their overdue payments and debts from past investment scams haven’t received a reply from the broker or his team members.

“I emailed the company, but I never received a response from him, other than the worthless settlement offer I got in the mail in 2020,” says disabled veteran Steve Gern, swindled out of some $48K nearly ten years ago.

Lubaszka’s Allure: A Potentially Fatal Trap For The Unaware

A man of strong appeal and big dreams, Lubaszka has lived for years fully devoted to promoting his vision of grandiosity and building his professional and personal legend.  Standing at 1.87m tall, the dark-haired entrepreneur with hazel eyes is a self-proclaimed Harvard graduate and a Guinness record holder, who doesn’t even need these institutions to recognize his alleged ‘achievements,’ because his powerful desire to be internationally crowned and worshiped is alone enough to sustain his seemingly delusional beliefs. 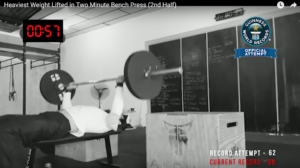 The Guinness World Records organization denied in an email Marc Lubaszka’s claims that he holds a world record on bench press.

Aligned with such narcissistic tendencies, the investor saw the onset of the pandemic as another opportunity to launch his online PR campaign and brag about his fleets of jets in an article entitled “Small Business Owners Play Like the Big Boys” that he –and not a real writer– authored under a pseudonym: Scott Mason, a fictional aviation expert whose vast published works come down to this and only this Medium piece.

Marc Lubaszka bragged about his private jet company in a Medium article he wrote using a pseudonym: Scott Mason.

In an effort to prevent readers from linking the jet company directly to Lubaszka, the March 2020 article omitted his first and last name as well as other identifiable information. But the devil is in the details, and it’s the story’s ultimate intent that could pose serious legal challenges for the CEO –including alleged misrepresentation and alleged conspiracy to commit fraud–, given that Lubaszka tried to raise $35M from investors with false claims that Fly Private X possessed fleets of private jets that didn’t have. 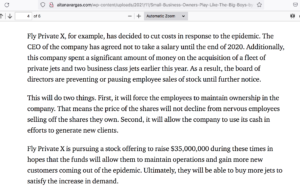 This public solicitation is now, along with other reports of potentially fraudulent business activities, in the hands of the FBI and the SEC, as confirmed by sources who shared information with federal agencies. Lubaszka’s online article, which also stated that he had decided not to take a salary until the end of 2020, was removed from Medium months ago.

But in an additional attempt to lure in investors and validate his private jet company’s operations, the broker also stole and posted photos and biographies of flight attendants, models and pilots on the site “Staff” section. Even the gold dealer’s imaginary and most iconic assistant, Krista Collinsworth, took to the task of hiring personnel and engaged in email and text exchanges from Lubaszka’s private cell phone.

Among the highest-profile flight attendants featured online were models Nirosha Peltier and Sunessis de Brito, whose professional descriptions stated that they “work together on all flights” and have years of experience to deliver a pleasant journey to the company’s exclusive pool of clientele. De Brito, a native of Brazil, didn’t respond to multiple requests for comment and eventually blocked me on Instagram, but Peltier confirmed that the jet company was smoke and mirrors.

“I didn’t really know Marc. I just met him a couple of times, and he wanted us to work for Fly Private X, but nothing really came out of it,” Peltier said. “He didn’t have any jets and his assistant, Krista, was really him.”

While Lubaszka had permission from de Brito and Peltier to post their information online, other purported members of Lubaszka’s featured staff denied any links to or knowledge of him or Fly Private X and were upset that their pictures and information were being used to advance his shady agenda.

Around the Fall of 2020, Fly Private X removed the profiles of all flight attendants and pilots featured as “staff” on the company site but some still remained in Google searches.

“I’ve not heard of the company or spoken to anyone about it,” says flight attendant Laura Fay. “(They have) absolutely no consent from me (to post my experience and information).” A Texas-based flight attendant also denied being part of Lubaszka’s staff and stated that the company was not authorized to use her image and professional experience on the site.

Facing mounting pressure from prior and new victims, around the Fall of 2020, over 18 photos and profiles of alleged staff members were removed from the Fly Private X site and replaced with a note stating that the company had 35 openings across the globe. None of those positions seemed to have been filled as the site went “under construction” around the summer of 2021.

*Don’t miss PART III of this investigative series: A rapper in his twenties becomes Lubaszka’s VP of Fly Private X, an exec in the conman’s latest gold coin company and his patsy.

**If you’d like to share your testimony or story, please contact the reporter at aitana_investigations@protonmail.com or connect with her on Facebook. All emails are checked for legitimacy, spam and viruses and deleted when suspicious malware is detected.

*** Screenshots of the Fly Private X online catalogue and website featured in this series were taken before the site’s content was removed and it went under construction.

Read here Part 1 and Part 3 of the series.