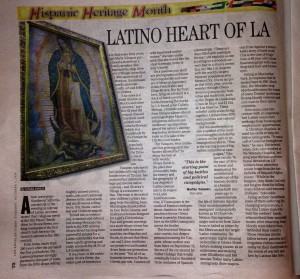 A heat wave grips Southern California around six in the evening as a group of Latino devotees attend their religious needs at the Old Plaza Church close to Olvera Street, evoking memories of the first church built here by the Spanish settlers in the 18th century.

Even today, more than 200 years after the arrival of the first pobladores, the Latino presence strongly permeates this part of town, from the little shops selling brightly colored pottery, crafts, arts and traditional dresses to the restaurants and small venues selling tacos, rice, beans, cactus leaf and Chiles en nogada.

Turned into a commercial, economic and cultural hub during Mexican rule back in the XIX century, Olvera Street has long been a powerful symbol for a Latino community that has been rapidly growing and today accounts for 48.5% of LA’s population.

It was here, in the emblematic Olvera Street, the oldest part of downtown LA, that some forty years ago Marta Vázquez purchased a store from a family member. She baptized the shop Olverita’s Village, more than 2,000 squared feet of Mexican, Guatemalan and Ecuadorian crafts, art and folkloric clothes. “Our store is a small window to Mexico and other countries,” says this 62-year-old woman dressed in a black outfit printed with colorful flowers, which was handmade by the Purépecha Indians, popularly known as the Tarascans of Michoacán.

Vázquez, who spent her childhood living in the border town of Tijuana, has nurtured her cultural heritage and diverse native customs – and Olverita’s Village is a testament to that. The room is decorated with children’s piñata hanging from the ceiling, beautiful dragons handcrafted by Don Pedro Linares, and traditional dresses designed for a girl’s 15th birthday. Past and present converge in a store whose owner has wrestled with economic troubles, earthquakes and floods to ensure that Mexican and Latino traditions are preserved and handed down from one generation to the next. “Not all of us, business owners in Placita Olvera, are rich. I started off with hard work and no money,” she says as she adds that she would like the shop to remain in the family’s hands.

On a medium-size shelf are photographs and items honoring the life and careers of Mexican legendary artists Frida Kahlo and Diego Rivera. Not far from here, lying on a lectern is a stack of black-covered books featuring the works by LA-based artist Calixto Shibaja, a humble painter from Oaxaca whose vibrant paintings depict Mexico’s indigenous cultures and traditions – an important part of his nation’s identity that he has strived to perpetuate on this side of the US-Mexican border.

For Vázquez, who confesses that growing up in the border allowed her “to enjoy the best of both worlds,” Olvera Street is the place that irrevocably links the history and the geography of Los Angeles’s Latino community to its respective Latin American countries. If Guanajuato is the cradle of Mexico’s independence, thanks to the independence fervor, Olvera Street is seen by Mexicans here as the little Guanajuato across the border.

This historical Mexican state carries, too, deeper personal meaning for Vázquez, whose mother was born there on September 15, the eve of the cry uttered by Father Hidalgo that would eventually lead to the end of three centuries of Spanish colonial rule. “These are days filled with nostalgia for me,” she explains as she is sitting on a wooden carved chair in a store’s corner. In a city like Los Angeles with the world’s largest Mexican population after Mexico City, it is no surprise that every year, crowds wander through Olvera Street to join popular festivities and traditions, such as the Virgen de Guadalupe, Cinco de Mayo and El Día de Los Muertos. These colorful celebrations bring together Latinos from different countries and cultural backgrounds.

But this marketplace is also a symbol of the continued struggles endured by Latinos on the path to an immigration reform. “This is the starting point of big battles and political campaigns,” Vázquez recalls. To the east of Olvera Street and dominating the architectural landscape of the historic district is a bronze statue built two years ago to commemorate the life of Antonio Aguilar. Once an undocumented immigrant and popularly known as El Charro de México, this legendary singer and actor from Zacatecas is hailed as a hero by the Mexican and the larger Latino community. He spent many nights sleeping on benches at Olvera Street before making a name as an entertainer and making over 150 albums and 160 movies. Today many Latino immigrants draw inspiration from Aguilar’s remarkable story of hard work. This is the case of Hugo Soto, a 46-year-old Colombian immigrant with receding dark hair and brown eyes.

Sitting at MacArthur Park, he explains that he landed here in 1981. Back then, the Westlake neighborhood became the home of many Central Americans fleeing bloody violence and civil wars in their native countries. Soto soon came into contact with an impoverished Latino community seeking cheap housing and employment opportunities.

A Christian chaplain, he used his skills to help his fellow immigrants. “It was a call of God that brought me here,” he says. For several years, Soto also worked at the Veterans Hospital, helping ease the loss and emotional devastation US soldiers bear when they return home from the battlefields of Iraq and Afghanistan. “While in the hospice, they think God will not forgive them for killing even children and innocent civilians,” Soto adds.

Lying on their deathbeds, some of them suffering life changing amputations, it was this Latino man who held the soldiers’ hands, who soothed their wounded hearts after returning from bloody wars where they defended their country. These veterans are the fallen heroes, patriots and forgotten victims consoled today on their deathbeds by the words of warmth spoken by Latinos like Soto.