A SPECIAL REPORT: THE HARROWING IMPUNITY OF WHITE-COLLAR CRIME – PART 3

AN IMPORTANT NOTE: On June 22, 2021, Hadari Oshri –Marc Lubaszka’s business partner– filed a civil harassment restraining order (CHRO) against me to stop the publication of my investigative series “A Special Report: The Harrowing Impunity of White-Collar Crime,” and any subsequent installments or future media coverage. On August 3, 2021, I filed an anti-SLAPP motion strike Oshri’s CHRO petition. In a hearing held on September 13, 2021, Los Angeles Superior Court Judge Doreen Boxer granted my anti-SLAPP motion and denied Oshri’s civil harassment petition for failure to sustain the applicable burden of proof. Oshri will now have to pay my attorney’s fees for filing a frivolous case. She also declined to go on a recorded interview or provide statements via email. And what follows are the next installments of my months-long investigative series whose publication Oshri desperately attempted yet failed to stop.

Fly Private X was formed in Delaware in 2019, yet it claims it was incorporated in Brazil in 2004.

Los Angeles (CA) – As the COVID-19 pandemic claimed victims all over the world, conman Marc Lubaszka took to the streets of America to recruit co-conspirators capable of helping him to run his sophisticated private jet and gold coin business operations. But, surprisingly, he didn’t get the best nor the most sophisticated players in the game. Instead, he enlisted a Texas-based rapper in his early twenties trying to make it big in the entertainment industry and with no experience as a business executive: Dylan Rottkov, known by the stage name of Dylan Raw.

Seduced by Lubaszka’s alluring promises of quick money and a lavish life-style, in 2020 Rottkov announced that he was the VP of Fly Private X on his Instagram account.

Rapper Dylan Raw announced on his Instagram profile that he was the VP of Fly Private X. The information has been removed from his IG account but remains on search results.

Around mid-April 2021, following several media requests that Rottkov had ignored from me earlier this year, the rapper finally called me and engaged in a heated, contentious and bizarre on-the-record interview about his participation in Lubaskza’s schemes.

“You’re probably the reason why I took down the information on Fly Private X from my Instagram account!” he lashed out at me in an attempt to deflect any responsibility.

Rottkov confirmed that he knew about Lubaszka’s previous gold scam but explained it away by stating that it’d happened a decade ago and he had nothing to do with it. As the singer played down the conman’s tumultuous past, he stated he’d joined Fly Private X to capitalize on a “lucrative industry,” make good money in a few months if he sold a private jet and become the hallmark for success. 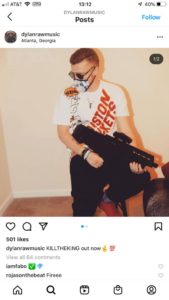 Screenshot of rapper Dylan Raw’s Instagram account taken in April 2021. This and other photos of him have been removed from his public account since our interview.

He denied brokering any deals, selling any planes or gold and underscored that he wanted to send a positive message to the world –in spite of photos of him holding firearms and rolling weed on multiple public Instagram posts that have been removed since our interview.

But Rottkov’s participation in Lubaszka’s enterprises doesn’t end here. Public records also show that the hip-hop artist from Long Island is listed as an officer in the conman’s new gold company –Buy Gold Brightly–, which was created in Montana in February 2021 under a 14-year-old shelf corporation: Gold Title, Inc.

Furthermore, Buy Gold Brightly looks like a clone of Lubaszka’s defunct Aurum Advisors and Gold Coins Gain, and it seems to have picked up its coin investment operations where the former two fraudulent companies left off a decade ago.

“I paid $12 for the gold WordPress site and maybe that’s why they put my name on the company (Buy Gold Brightly),” Rottkov said as he dodged my multiple attempts to have him confirm or deny if he’d consented to being listed on the gold company’s official filings. 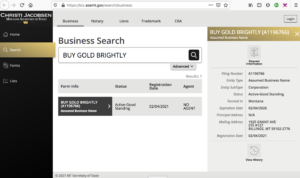 Buy Gold Brightly was registered in Montana in 02/04/2021 under a 14-year shelf corporation: Gold Title, Inc. But it misleadingly claims to have been in business for 14 years.

“I’m not a victim (of Lubaszka),” he stated several times, making it clear that he was a willing participant in the conman’s business operations. “I’ll continue to take your calls and give you insights if you keep my name anonymous,” he said even though we’d agreed that the interview was on the record, and I had clearly stated that I was taking notes of everything he said.

While willing to throw Lubaszka and Hadari Oshri under the bus to save himself, as of mid October 2021, Rottkov was still following both of his controversial business partners on Instagram –a sign, one could conclude, that the rapper is still Lubaszka’s official patsy.

Until recently, Buy Gold Brightly had two divisions: A site that referred visitors to gold dealers nationwide –which was taken down in the weeks following my interview with Rottkov– and a Myshopify site that allows consumers to purchase coins and invest in gold IRA plans. 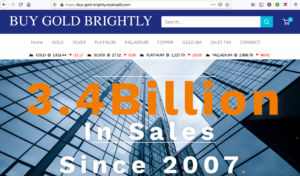 A simple look at Buy Gold Brightly’s Myshopify site reveals highly dubious information: The toll free number listed for consumers to reach Lubaszka’s and Rottkov’s team rings to the International Fellowship of Christians and Jews, who were stunned to hear over the phone that the company is misusing their phone number.

The brokerage site also identifies its trading offices on the 11th floor at 1999 Avenue of the Stars in Los Angeles and “celebrates” having achieved $3.4bn in sales as of the company’s 14th anniversary. However, Buy Gold Brightly was only created earlier this year, not 14 years ago, and the company managing the virtual suites on the 11th floor has not confirmed that Lubaszka is one of its tenants. Simply put, the gold scheme is just one of Lubaszka’s deceiving signature tricks.

“It’s like a deja vú,” disabled veteran Steve Gern regrets. “Ten years ago, I, along with 47 other victims, were swindled out of almost $2M, but Marc managed to get away with everything, and now he’s back with a new IRA gold scam that could potentially leave many more victims. He’s absolutely shameless. 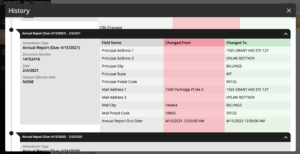 Don’t miss PART IV of this investigative series: A look into the convoluted world of Hadari Oshri: From a failed fashion fairy empire to nonexistent private jets and PPE dealings linked to convicted fraudster Arael Doolittle.

*If you’d like to share your testimony or story, please contact the reporter at aitana_investigations@protonmail.com or connect with her on Facebook. All emails are checked for legitimacy, spam and viruses and deleted when suspicious malware is detected.

**The phone interview with Rottkov was on the record, yet we agreed that no audio would be recorded. Only notes would be taken.

***Screenshots of the Fly Private X online catalogue and website featured in this series were taken before the site’s content was removed and it went under construction.

Read here PART 1 and PART 2 of this investigative series.